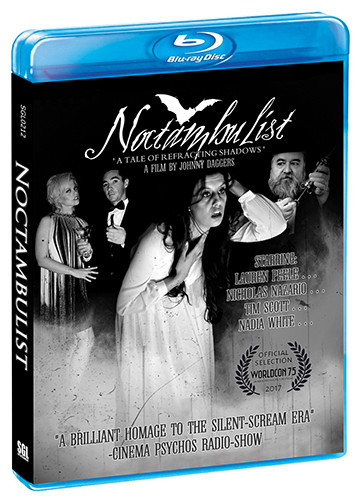 THIS IS A SILENT MOVIE After her mothers death, Zella descends into a world of madness. Is she merely dealing with her mothers passing in extreme measures? Or perhaps her husband Stellan is helping to force the hand of fate by pushing her to an early grave? Hopefully, Zella, with the help of Dr. Krauss will find the answers in which she is seeking as she ventures through a series of bizarre nightmares.

A romantically harrowing voyage with a psychological twist. Beautifully and eerily portrayed in light and shadow with dreamlike abandon

—Dava She Wolf of Cycle Sluts From Hell

Noctambulist is a bold and beautiful addition to a lost art. It moves not like a silent film, but rather dark and sexy and completely modern. Bravo, Johnny Daggers!

A brilliant homage to the silent scream era with tones of Dr. Caligari and Nosferatu. If you appreciate silent horror, you'll love Noctambulist

Silent film has a new maker, Jonny Daggers shines bright as a new era Hitchcock for this Noir generation

A deadly speakeasy cocktail that blends gothic sophistication, shadow and wicked betrayal with a spritz of diabolique-tension and a 'deco' musical garnish that brings this pallet cleansing thriller to surreal life

A charmingly dark emotional ride with characters you can feel
—David J. Fairhead Author of Dwelling in the Dark