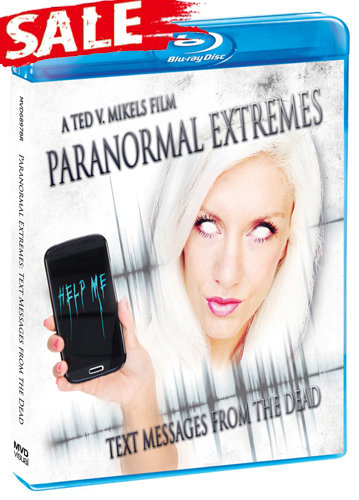 Paranormal Extremes: Text Messages from the Dead explores the mysterious phenomenon of communication between the land of the living and the world of the dead. A beautiful Las Vegas showgirl has always felt a connection with the spirit world. After her fiancee dies in a tragic accident, she begins receiving foreboding messages on her cell phone. She soon realizes that these messages must be from her dead lover, who is contacting her from the other side. This tale of love, death, and the afterlife was created by grindhouse filmmaking legend Ted V. Mikels. One of the most wildly eccentric writer directors of all time, he is well remembered for such 42nd Street shockers as The Astro Zombies (1968) and The Corpse Grinders (1971). His exploits were documented in the film The Wild World of Ted V. Mikels. At age 85, he is also the oldest independent filmmaker still active in the industry. Gorgeous runway model Colie Knoke makes her film debut in Paranormal Extremes: Text Messages from the Dead. Making her second appearance in a Mikels' film is Beverly Washburn, best known for the cult favorite Spider Baby (1967) and her appearances on classic television programs like The Jack Benny Show, Adventures of Superman, and Star Trek.

"INCLUDES BONUS FEATURES"NOTE: This Blu-ray Movie is Distributed Direct from SGL Entertainment and is Sold Brand New and ShrinkwrappedBonus Materials Include:

Legendary Filmmaker Ted V. Mikels Does it Again!!! One of his Best Films Ever!!!