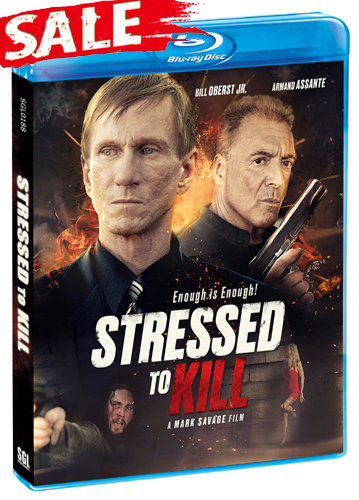 After suffering a heart attack, Bill, an angry middle-aged man (Bill Oberst Jr.) reduces his blood pressure by, literally, eliminating the stresses from his life, His murders attract the attention of a psychotic cop (Armand Assante) who isn’t sure if he wants to arrest Bill or join him on his murderous rampage.

Bill Oberst Jr is great in the lead role. He's on the screen for the majority of the film, and his performance dominates
-Stuart Willis

It’s something that we can all relate to, especially when you have one of those days, you know the ones I’m talking about
-Adam the Movie God

Bill Oberst gets mad props for his stellar performance of our main character, he’s easily someone you can cheer for given the circumstances that his character must face
-The Other View

One of the most entertaining films of the decade, this film has it all, revenge, comedy, horror and more!
-Movies Models and Music Magazine