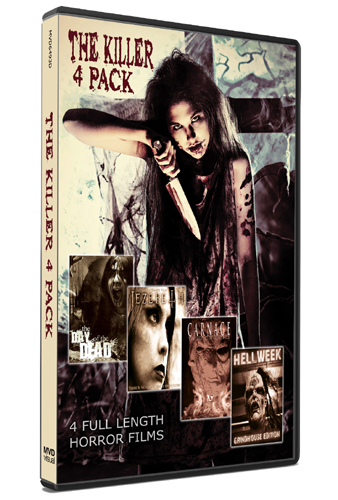 SYNOPSIS: THE KILLER 4 PACK is a collection of SGL Entertainment’s Top Horror Films.

THE DAY OF THE DEAD: Based on true facts, a gang of suburban kids is sport-killing home-less people just for fun in the streets of Chicago. One day, they decide to try a new excitement, by murdering a young Mexican working girl, assuming there would be no consequences since she was illegal. Police detective Carla Moreno takes the case personally and starts an investigation that leads her to a case of racial hatred and police corruption. The father of the victim is allowed into the country with a 15 days humanitarian visa, so that he can take his daughter’s body back to Mexico. Detective Moreno is made responsible for the father by the Homeland Security Department. Things get complicated for detective Moreno, when the body of the girl mysteriously disappears from the morgue and the father decides to take investigation in his own hands… and maybe justice as well… Directed by: Ricardo Islas

JEZEBETH: This movie is more than a horror film, it is a musical experience unlike any movie ever made. A cult horror film loaded with visuals and sound that can be enjoyed over and over again. In the attic of her ancestral home, Jezebeth, at war with God, unwittingly discovers a nineteenth century diary that details the summoning of a demon. Jezebeth succeeds in breaking a satanic code inside her hell room which creates for her two realities. Lenora Blandy (Madeline Maser), a devout catholic, endlessly tortured at the hands of Jezebeth, has come to the end of her rope. Nowhere to run, nor hide. She’s forced to confront her demons. Directed by: Damien Dante

CARNAGE THE LEGEND OF QUILTFACE: Four students set out for the barren Nevada desert on a class photography assignment. They are soon confronted by a machete-wielding maniac known as Quiltface. Directed by: Massimiliano Cerchi

HELLWEEK GRINDHOUSE EDITION: Rush week turns unexpectedly hellish when a band of sadistic, masked, homicidal maniacs holed up in an abandoned warehouse wreak havoc on a bunch of not-so-innocent college kids. Wanting to ensure the new pledges prove they’re worthy, fraternity president J.J. sends them to a deserted warehouse rumored to be inhabited by demonic squatters. But the hazing takes on a sadistic tone when the tales turn out to be true. Now the pledges find themselves in a fight for their lives. Directed by Eddie Lengyel, this gory spine-chiller stars Robyn Griggs, Brenna Lee Roth, Karen Fox, Rob Jaeger and Michael Reddy. Directed by: Eddie Lengyel

'SGL's THE KILLER 4 PACK comes on a single, low cost disc. Typically cramming four films on a single disc means that the quality is sacrificed for quantity but that thankfully isn't the case here... fans of low budget horror will be most entertained'

'I Highly Recommend Getting this DVD'

—B is for Best , The B Movie Avenger