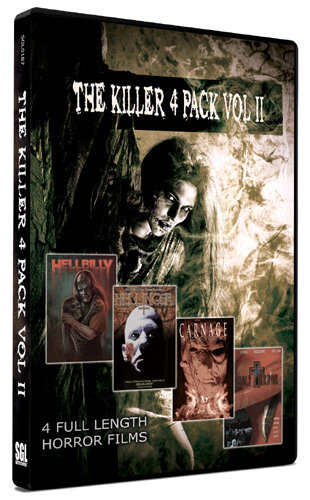 HELLBILLY In a small town in Nevada, all Hell breaks loose when Billy, a disfigured hillbilly and direct result of incest between brother and sister decides to dismember anyone who gets in his way. This movie is the lost works from horror filmmaker Massimilano Cerchi, and is now being released for the first time ever. WARNING: This film contains unspeakable acts of violence.

HELLINGER A fallen man of the cloth forever bound to the fires of Hell by a pact made with Satan is unleashed to torment humankind. Now the man once known as Father Donaldson has become Hellinger, an unstoppable demon with a unquenchable hunger for human souls and a special place in his black heart for the girl who now thinks he was a mere figment of her imagination.

CARNAGE: THE LEGEND OF QUILTFACE Four students set out for the barren Nevada desert on a class photography assignment. They are soon confronted by a machete-wielding maniac known as Quiltface.

HOLY TERROR Possessed by a demon in life and forced to spend eternity doing the devils bidding in death, a malevolent nun returns to life to torment a young couple and their terrified friends in director Massimiliano Cerchis sacrilegious shocker.